Kashayam (also known as Kasayam) is not a specific beverage; the term only denotes a way of administrating Ayurvedic medicine in the form of a medicinal beverage. Therefore, a wide range of kashayams exists, with varying ingredients, proportions and preparation methods.

Many recipes for kashayam includes spices and herbs that are commonly used in food or home remedies on the Indian subcontinent, such as:

Some kashayams include only water and one spice or herb, while others are more complex. Many kashayams are quite bitter in taste.

In Ayuervedic medicine, kashayams are used to treat a wide range of ailments, including indigestion and the symptoms of upper respiratory tract infections. There are also those who drink kashayams once a week as a preventative measure, as certain kashayams are believed to be “cleansing” for the body. 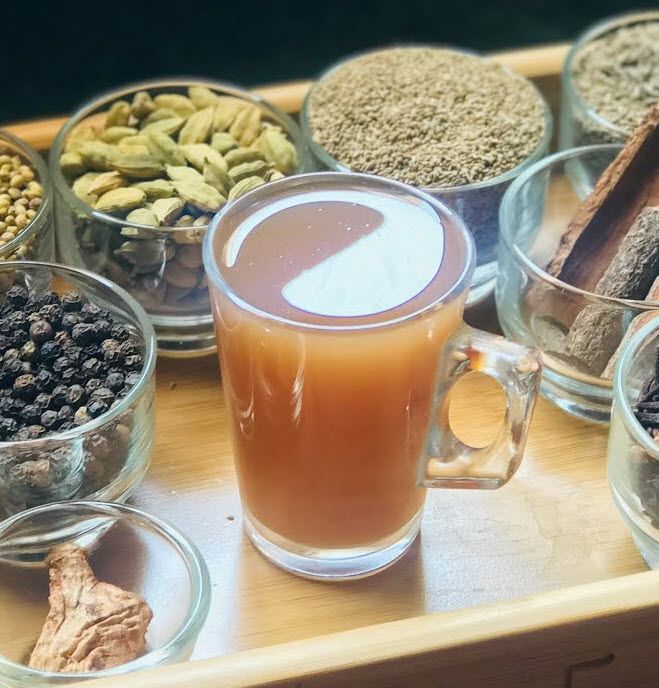 Ayurveda is a type of alternative medicine that developed on the Indian subcontinent. The belief system and its associated treatments have evolved over more than two millennia.

The main classical Ayurveda texts start with stories about how medical knowledge was transmitted from gods to human sages, and then to physicians. In the compendium Sushruta Samhita, Dhanvantari – a Hindu god of Ayurveda – incarnates himself as a king of Varanasi to teach medicine to human physicians.

Today´s ayurveda divide medicine into eight canonical components. Two of the eight branches of classical ayurveda deal with surgery, while the other six only use non-surgical methods. Modern-day ayurvedic practitioners tend to focus on the importance of continuously building and maintaining a healthy metabolic system, including good digestion and excretion. Hygiene is also important, including bathing, mouth cleaning, eye washing and skincare.

Using ready-made ayurvedic preparations can be risky. In 2008, a study unveiled that over 20% of the tested Ayurveda U.S. and Indian-manufactured medicines sold online contained toxic levels of heavy metals, specifically lead, mercury and the metalloid arsenic.