Masala chai is a popular beverage on the Indian subcontinent, from which it has spread throughout the world. Masala denotes spice mix, while chai means tea in a variety of languages, including Hindustani.

Masala chai is created from a combination of black tea, spices/herbs and milk. Adding a sweetener, such as a jaggery, plain sugar or honey, is common.

In India, it is common for each household and street vendor to have their own recipe for masala chai, and both the exact ingredients and how the beverage is prepared can, therefore, vary quite a bit. There are also regional differences reflecting local tastes, climates and available ingredients. Many blends do however strive to make cardamon and ginger the two dominant notes. In Western India, it is very common to add lemongrass and completely stay away from including any cloves and black peppercorns in the mix. 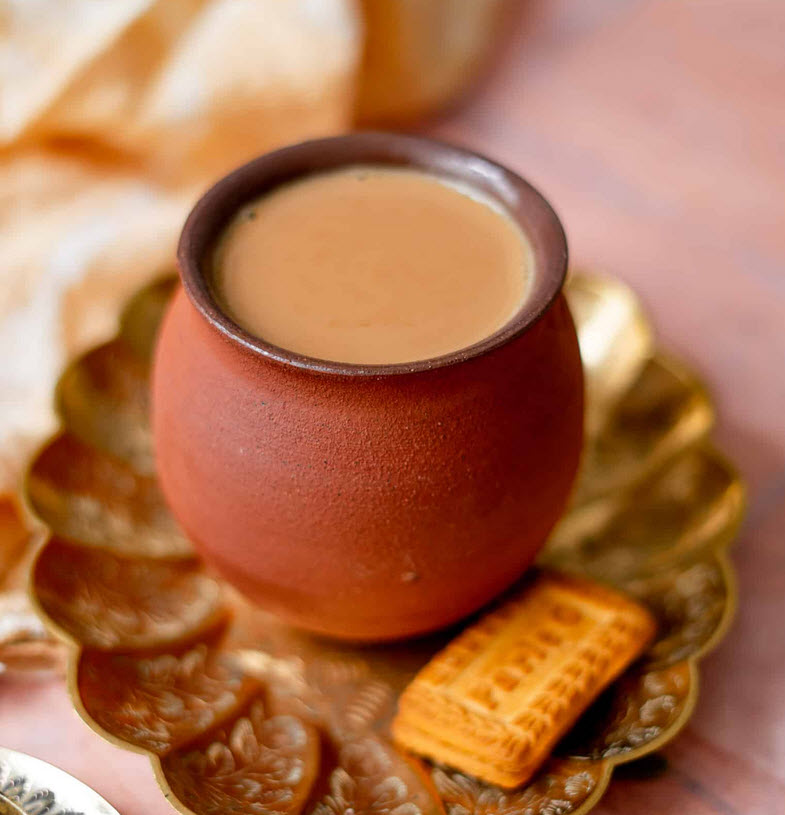 The spice mix (masala) used for masala chai is called karha. A wide range of karha versions exists on the Indian subcontinent.

Examples of common ingredients for karha:

This is one of a myriad of recipes used for karha masala.

Place all the ingredients in a hot dry skillet and roast over medium-high heat until the spices begin to give off strong aromas. Ground them together using a mortar and pestle until smooth.

The black tea selected for making masala chai is typically a strong one, such as Assam. It must be capable of standing up for itself, otherwise, it will be overpowered by the strong spices and seriously weakened by the milk.

In India, a special type of Assam called mamri is a very common choice for masala chai. Mamri tea has been cured in a way that makes leaves form granules.

Assam tea is grown in Assam, a state in northeastern India, south of the eastern Himalayas. The tea plant is named Camellia sinensis var. assamica and is native to the region. Early efforts to plant Camellia sinensis var. sinensis in the region did not fare well, but the assamica version is perfectly adapted to local conditions and can handle the heat and high humidity characteristic of the near sea-level areas where Assam tea is grown. During the monsoon period, up to 300 mm of rain can fall here in a day. The tropical climate of Assam contributes to the tea´s brisk and malty taste.

In India, the milk of choice for masala chai is usually buffalo milk instead of cow milk. The animal is the domestic water buffalo (Bubalus bubalis), which is native to the region.

To make your masala chai, mix one-part buffalo milk with two or three parts water. Heat up the liquid to almost boiling before using it.

On the Indian subcontinent, a wide range of sweeteners are utilized for masala chai, depending on local price and availability. In many rural parts of India, jaggery is the least expensive choice. Other common options are plain white sugar, brown cane sugar, palm sugar, coconut sugar, and honey.

Some drinkers like to use condensed milk in their masala chai, since it brings both milk and sweetness to the beverage.

Chai can also be consumed without any sweetener.